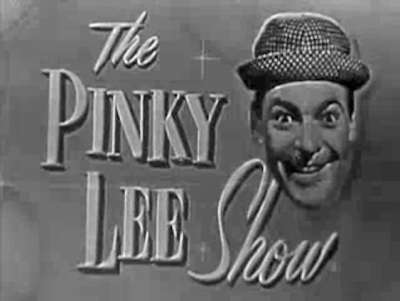 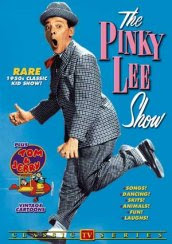 Frenetic, surreal, careless, and grotesque...these are just a few words to describe The Pinky Lee Show. Critics of children's television in the early 1950's were alarmed, and while parents and children welcomed Pinky Lee into their living rooms, it is hard to imagine that anyone would allow the checkered, silly clown through their front doors. This was not the gentle sophistication of Kukla, Fran, and Ollie, but crass production geared toward selling children's products. 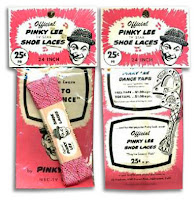 The show itself was heavily adlibbed, and the super-kinetic pace kept children's attention; but, the lack of studied scripting allowed questionable content to air live across the nation, and in the prime schedule spot just prior to The Howdy Doody Show. Divided into short, fast-take segments, the show featured sketches, audience interaction, and music. One episode featured a children's song promoting playing with scissors, while another performance featured a ditty about girls hearing wedding bells. Intermingled with this was Pinky Lee's lap sitting with the kids and rapid-fire product placement, such as the Miss Sweet Sue Doll and Pinky Lee's own merchandise, such as Pinky Lee shoelaces and the Pinky doll.

The show, however, was nearly as popular as Howdy Doody, and millions of children adored Pinky's antics and parents adored his baby sitting services. Then came the day that horrified children for years to come. The author of Classic Kids TV perhaps states it best:

One of my most vivid memories from my earliest days of TV watching is the day that I watched the live broadcast of the Pinky Lee Show when Pinky Lee appeared to have a heart attack right in front of his studio audience and millions of young, impressionable at-home viewers.
On the day in question, I was sitting on the living-room floor watching the show as my mother was in the kitchen.   I think it was at some point near the end of the show when Pinky suddenly stopped singing and running around and clutched his chest, looking straight at the camera, and said something like “Somebody please help me” before he keeled over onto the floor.   I think the camera stayed on the empty spot where Pinky had been standing for a few seconds, and then the TV went blank.  I remember running breathlessly into the kitchen and wailing at my mother, “Mommy, Pinky Lee fell down!  Pinky Lee fell down!” before I burst into tears.

Indeed, children were stunned, and parents too...and as they tuned in the following day, there was still no Pinky. Nor the following day, or the next. Pinky Lee's collapse from acute nasal problems kept him off the air for a year and a half, instantly ending the popular live broadcast. Rumors abounded that Pinky had died of a heart attack. Ironically, when Pinky finally returned to TV - as host of the new Gumby and Pokey Show, his short run ended quickly on November 16, 1957, soon after he did have a heart attack. Fortunately, this time not on television, but Pinky's career never recovered to the heights of his short-lived heyday in the mid-1950s

Posted by Iconservation at 12:36 AM