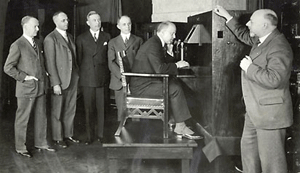 Television pioneer Charles Francis Jenkins is credited with several early broadcasts on the east coast, and on April 17th (some sources credit the date as April 9, 1927), arranged the first city to city television transmissions - or as Jenkins called it, radiovision - of a conversation with Secretary of Commerce Herbert Hoover. With a mock studio set up in a Washington DC funeral parlor, Hoover - who had been receiving as much press as President Coolidge due to his radio broadcasts about the thriving U.S. economy - spoke with AT&T president Walter Gifford and was transmitted through the phone companies lines:

Hoover: It is a matter of just pride to have a part in this historic occassion. We have long been familiar with the electrical transmission of sound. Today we have, in a sense, the transmission of sight, for the first time in the world’s history.

Gifford: The elaborateness of the equipment precludes the possibility of television being available in homes or businesses generally, What its practical use may be, I will leave to your imaginations. As well as being displayed on a small screen, the images are shown on an array of lamps three feet high and two feet wide.

Hoover: Today we have, in a sense, the transmission of sight for the first time in the world’s history. Human genius has now destroyed the impediment of distance in a new respect, and in a manner hitherto unknown. All we can say today is that there has been created a marvelous agency for whatever use the future may find with the full realization that every great and fundamental discovery of the past has been followed by use far beyond the vision of its creator.

The telecast was transmitted from Washington DC to New York, and New Jersey, and 200 miles away in an AT&T laboratory, 60 men watched the first talking images transmitted over phone lines between multiple cities. The New York Times was jubilant about the event, writing "It was fun as if a photograph had suddenly come to life and begun to talk, smile, nod its head and look this way and that..."

The broadcast, however, includes the earliest transmission of tasteless, inappropriate television, as comedian A. Dolan, appeared in black face and spoke with a stereotypical dialect. Unfortunately, this proved more prophetic than Hoover's speech about the future and direction of television programming.

Charles Francis Jenkins first began working with the transmission of "electric pictures in 1894." His pioneering work continued his entire career; however, he represents the incongruities of early broadcasts and competing systems. In the end, Jenkins mechanical method of television lost to electronic broadcasts, but he did establish the first television station, W3XK (located in Wheaton, Maryland) and accomplished the sell of several thousand television receivers along the east coast. He, like Philo Farnsworth, was gobbled up the the behemoth RCA in the early 1930s.

Posted by Iconservation at 6:25 AM