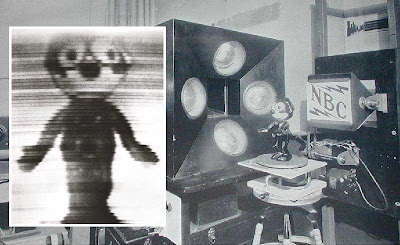 The 1929 regular broadcast of Felix the Cat is legendary, and is often cited as the first television broadcast. It was not. In actuality, there had been many broadcast before, including presidential speeches, windmills, a dramatic play, and regular programming. It is not even RCA/NBC's first broadcast. It does not even pre-date the first Milton Berle telecast! What is the 1929 Felix the Cat broacast then?

The 13" paper mache Felix doll rotating on a turntable is the first daily broadcast. For two hours every day, the same non-animated cartoon character, simply spun around and around. The broadcast image was a mere 2 inches tall and compiled of a paltry 60-line screen picture. Broadcast on New York City's channel 1 from Van Cortlandt Park, Felix the Cat was the early broadcast image best remembered, most likely due to RCA's publicity machine, thus, becoming television's first true icon.

Posted by Iconservation at 8:47 PM