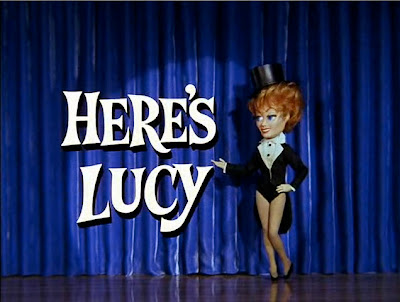 After 19 years in television, Lucille Ball could still attract huge audiences and lure top stars to appear on her show. On September 14, 1970, Here's Lucy kicked off its third season with guest appearances by Hollywood's royal couple, Elizabeth Taylor and Richard Burton. The plot revolved around Taylor's famous diamond ring, and basically implements a re-written comedy block from an old I Love Lucy script. It would be unfair to suggest the plot was stolen from I Love Lucy, since this episode also marks the return of the show's original writers to Lucy, a long-standing misunderstanding finally resolved. Directed by Dick Van Dyke's Jerry Paris, and featuring a cast and crew of classic television veterans like Gale Gordon, Vanda Barra, Cliff Norton, Army Archerd, Milt Josefsberg, Irma Kusely, and Hal King, this episode presents a simplistic throwback to the great days of old.

The season premiere, titled "Lucy Meets the Burtons", received huge promotion, including a TV Guide cover, and gave Lucille Ball her highest rating since the birth of Little Ricky in 1952! In many ways, this episode is the final hurrah of television's early days, as a batch of brand new shows hit the airwaves that will change the direction of programming, most notably All In the Family, The Mary Tyler Moore Show, The Flip Wilson Show, and The Odd Couple. While Lucy will hold firm in the Top Three for the season, most of television's old classics are disappearing. Ed Sullivan, Danny Thomas, Lawrence Welk, Fred MacMurray, and Red Skelton get the axe to make way for a newer, more sophisticated approach to programming. The Monday night of September 14, 1970 symbolically represents the changing of the guard, and is the last time the great pioneers of television will rule the airwaves and capture a record breaking percentage of the viewing audience.

Sources: The Complete Directory to Prime Time Network and Cable TV Shows by Brooks and Marsh
The Lucy Book by Geoffrey Mark Fidelman


Posted by Iconservation at 6:03 AM