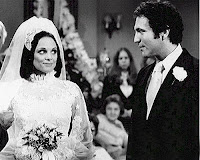 There was no reason to suspect Rhoda would be more popular than Mary Tyler Moore, but the spin-off was a power house from the start. As Mary Richards' best friend, Rhoda was not the American dream girl next door. She was fiery, witty, heavy-set, and neurotic, but she had a heart of gold. So after 4 seasons on Mary Tyler Moore's show, she visited her family back home in the Bronx, met a man named Joe, and fell in love.

In just nine episodes, the romance blossomed into engagement, and on October 28, 1974, marriage. The classic episode featured the entire gang from Mary Tyler Moore, and was expanded to a full hour special broadcast. As America's favorite ne'r do well and first popular Jewish television character, Rhoda and her wedding were par for the course. There were bickering relatives, the put-upon sister, plus the prickly gang from Minneapolis, including her nemisis Phyllis (played by Cloris Leachman). And Rhoda, deliciously played by Valerie Harper, nearly missed her wedding! The climax came as she ran through the streets of New York in full wedding attire late for her own ceremony.

The episode was the highest rated sitcom episode ever at the time. Valerie Harper won any Emmy, also becoming the first Emmy-winning character for both supporting performance and lead performance. This feat has never been matched again in television.


Posted by Iconservation at 8:49 AM