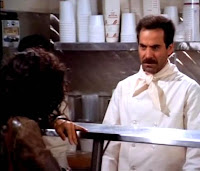 Not since I Love Lucy had a television show broadcast one classic episode after another classic episode, and the 116th episode of Seinfeld, broadcast during the show's seventh season, is only one of the shows dozens of pop culture defining momements. In the 1990s, every Thursday was a television event and nearly every Thursday was Friday's conversation. Arguably the greatest Seinfeld show was the Soup Nazi.

Seinfeld writers had a knack for creating a crescendo of comedy from nothing at all, and this episode proves hilarious with just a string of elements such as a soup line and a typical New Yorker's difficulty moving furniture into an apartment.

The episode was influenced by a real New York restaurant famous for soup. Al Yegeneh, the inspiration for the Soup Nazi character, closed his restaurant in frustration with fans of the show, but in 2005, began selling his classic soups in grocery stores across the nation. "No soup for you!" became a national catch phrase in fall of 1995.


Posted by Iconservation at 4:44 PM