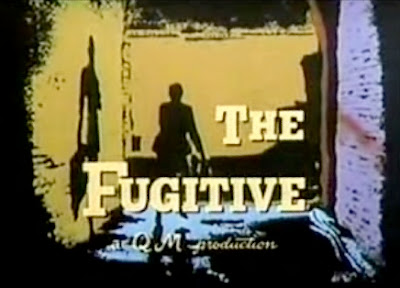 The Fugitive was the television series that did everything the right way. Opening with a bang, the premise found Dr. David Kimble discovering the murder of his wife, being arrested, and escaping after his train derails en route to prison. The drama unfolded over the seasons much like an anthology series, with Dr. Kimble's miscelaneous interactions with people he met while on the run. The running thread, however, was the mysterious one-armed man, the true murderer.

The Fugitive
catapulted into big ratings, and over 119 episodes, never lost its focus or power. At the end of 4 perfect seasons, The Fugitive broadcast the final show, #120. It is notable that this final broadcast was the first of its kind, as no other television show had ever capped its run with an ending plotline.

Dr. Kimble finally met face to face with the one-armed man, culminating into a powerful, breathtaking fight scene atop a water tower. After much struggle, the one-armed man drops the long fall to the ground, ending David Kimble's long run from the law.

This is the first great television series finale, and it broke all ratings records. It would be another full decade before another television show would bookend a series, Mary Tyler Moore in 1977.

Prior to The Fugitive, The Life and Legend of Wyatt Earp closed its 6-year run with a 5 episode story arc of the showdown at the OK Coral between Earp, Doc Holliday and the Dalton Gang.

Posted by Iconservation at 10:14 PM