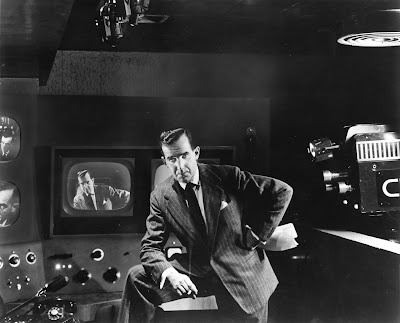 See It Now, Edward R. Murrow's ground-breaking news program, had previously in the fall of 1953 broadcast about the red scare. Scores of innocent American's were labeled communists, and a growing political tactic was throwing the communist label at any American with countering views. Senator Joe McCarthy led the way with disgraceful Senate hearings impeaching the name of numerous Hollywood writers, directors, and actors. The result was terrifying. The witch hunt was on and the dividing lines becoming clear. The Republican party was American, the Democratic party labeled socialist.

Also in the fall of 1953, America's number one star was mired in the sludge of the communist hunt. Lucille Ball escaped destruction perhaps by the sheer power of her fame, but I Love Lucy's 3rd season premiere was anticipated by many to be her last. Lucy escaped career destruction, and a popular 1952 play by Arthur Miller, The Crucible, also exposed the red scare as tantamount to the 1692 Salem Witch Trials. Cracks were beginning to surface in Senator McCarthy's tirade. Certainly, these events and other's led to the See It Now broadcast in fall of 1953 exploring the red scare.

By March 9, 1954, however, Edward R. Murrow and producer Fred Friendly had decided to take matters into their own hands. The See It Now broadcasters decided to take Senator McCarthy's own words and flip them, hopefully exposing to America his hypocrisy and the dangerous path of fear-mongering. It was a risky venture, as journalism was expected to be unbiased, and CBS was concerned of a national backlash. The network, also realizing the seriousness of the subject, gave the green light but removed their logo or any network reference from the program's promotion.

The end result was a revolution, as the American public officially came out of hiding and began to question exactly who was un-American, the fear-mongering Joeseph McCarthy or the so-labeled communists. McCarthy was enraged, of course, and demanded an opportunity to respond; however, his appearance a few weeks later on See It Now was even more disastrous, and soon the Senate censured McCarthy, officially ending the Red Scare in America. While hundreds of careers and lives were destroyed forever, the broadcast of March 9, 1954 was American journalism's greatest television moment, and cemented the new medium's power to connect with audiences in troubled times. The immediacy of television continued to prove to be the single greatest instrument of persuasion, whether good or bad, right or wrong, television news came into its own.


Posted by Iconservation at 3:38 PM