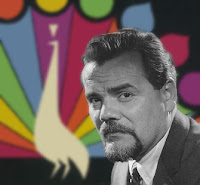 The single greatest example of branding in television history, the NBC Peacock first premiered in 1956. It was the creation of graphic designer John J. Graham. It came to represent NBC as the "Peacock Network" with the slogan Proud as a Peacock and was introduced to signify the networks significant work toward the popularity of color television. NBC, owned by RCA, had a great stake in color television, and while CBS and ABC only dabbled with the new color medium, NBC produced the major milestones in colorcasts - no doubt to energize the public and produce sales of RCA color television receivers. The initial broadcasts of the new color logo was in 1956 and was simply a still. The animated logo of the peacock spreading its color feathers premiered in December of 1957. The color logo replaced NBC's chime logo, a 3 chord xylophone illustration with a three tone audio, which premiered in color in 1954.

NBC requested the new logo from Graham with the call to create something that excited viewers about color and encourage television sales, and one that clearly indicated color when even viewed in black and white. The logo's success changed the image of NBC, promoting superior, colorful programming and is still used by the network today. It is one of the greatest examples of corporate branding, ranking up there with the McDonald's "M" arches and Coca Cola.

In 1959, Graham also created the "snake logo," to be used at the end of a program broadcast on NBC, and periodically, the network attempted to phase out the peacock logo, but by 1980, the network fully embraced the classic trademark and its importance. It has continuously been used since.

Posted by Iconservation at 4:26 PM