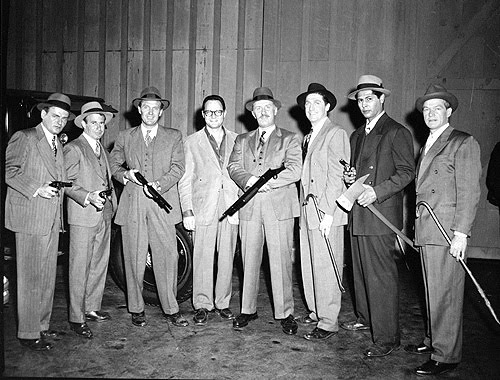 For the 1958-59 television season, Desilu Studios trotted out a new, hour-long anthology, The Westinghouse-Desilu Playhouse for CBS. While the majority of productions were only moderate successes, several productions pulled in spectacular ratings. Those top-rated shows were "The Lucille Ball-Desi Arnaz Show", the Twilight Zone pilot (The Time Element) and this surprise 2-part production based on a true-crime novel by Elliot Ness, The Untouchables.

Many industry insiders were shocked that Desilu was tackling such adult and violent fare. Arnaz had stated publicly that his studio would never put anything but family programming on the air. Nonetheless, the studio believed in the project; and desperately needed improved programming for Desilu Playhouse, and bankrolled production on the Desilu lot with star Robert Stack, film-noir director Phil Karlson, producer Quinn-Martin and cinematographer Charles Straumer.

The first show aired April 20, 1959. The script told the story of Elliot Ness, the FBI treasury man who pursued Chicago mob man Al Capone at the height of prohibition. Violent and dark, the show was grounded by a voice-over by radio's Walter Winchell. The Untouchables destroyed the competition in the ratings; and,the week-long buzz about the first hour brought increased interest, and the April 28 conclusion climbed even higher in the weekly ratings.

With the huge success and critical acclaim brought great controversy. Italian-American's were incensed by the mob stereotype - even Frank Sinatra protested. Others were outraged over the excessive violence, and much debate followed the telecasts about the increasing violence on television.

The show won Westinghouse-Desilu Playhouse Emmy awards for director, cinematography, and art direction. The Untouchables is the pioneer of modern day crime dramas featuring gratuitous and graphic violence, a hot topic that continues today. Robert Stack would later win an Emmy for the role.

Ironically, The Untouchables also began the downfall of Desilu Playhouse. When Desi Arnaz sold the show to ABC for $3 million, CBS was livid, and for the upcoming season, vengefully moved the Westinghouse-Desilu Playhouse to the Friday night graveyard time slot, and soon after, reduced production to bi-weekly before canceling the anthology in spring of 1960.

The Untouchables ran on ABC for four seasons and 118 episodes, giving Desilu studio and ABC its most profitable show and hit. It also paved the way for Desilu to branch out into drama programming, which led to Star Trek and Mission Impossible. Desilu released the 2-hour pilot as a theatrical film after it spring 1959 TV success.

Posted by Iconservation at 11:15 AM