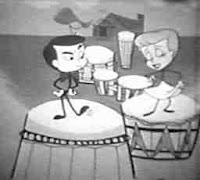 At the end of the 1951-52 television season, I Love Lucy had skyrocketed to the top of the ratings chart. In just its first season, 39 hilarious episodes were broadcast, each building on an audience that was breaking records. Like all other television shows, each broadcast was "watch it or miss it." Even filmed syndicated shows were limited to one run each. But in late spring, 1952, all of this was about to change.

As I Love Lucy ended the first season, it prepared to leave the air, like all network shows, for the summer. In Lucy's time slot, My Little Margie would run until the new fall season. It appeared, however, that the nations top show would not return in the fall, as Lucille Ball discovered she was pregnant.

In a landmark decision, producer and series creater Jess Oppenheimer decided to write her pregnancy into the show. This created a number of problems, the most significant was that Lucy would not be able to film enough episodes for the season's full run. Suddenly it dawned on Oppenheimer that Lucy existed on film, as it was not produced live as other television shows of the era. Those beautiful black and white prints and high production values were about to come in very handy. Oppenheimer realized he could pad out the season with re-broadcast of some of the first season shows, particularly the earlier ones that many fans had missed.

Several techniques are employed, including the cast creating new footage as a "flashback" technique, and other times the rerun being introduced by the announcer Roy Rowan as an audience requested repeat. Even the flashback technique is influential, creating a device used in many television shows to come (probably the most monumental being The Dick Van Dyke Show).

On October 20, 1952, just 6 episodes into the new second season, I Love Lucy reran "The Quiz Show", the fifth episode from Season 1. Ultimately, 9 episodes were rerun during the 1952-53 season. The remarkable popularity of these repeat broadcasts changed the way the entire industry viewed programming. It was no longer a one shot deal. In fact, the popularity of re-running I Love Lucy on CBS broadcasts kept the show out of syndication until the the fall of 1967! CBS purchased the show from Desilu in 1957 and reran the show exclusively on CBS until it was offered to local stations via syndication. CBS finally replaced I Love Lucy reruns with, of course, The Lucy Show, which was nearing its primetime run (1962-1968.)