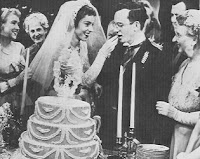 Show someone a photo of Wally Cox, and ask why he is famous? Most television fans would respond that he was the bird-watching boyfriend of Elly Mae Clampett, or the nervous guy from Here's Lucy, or perhaps the computer geek from the classic Twilight Zone episode "From Agnes with Love." An even more savvy television viewer might recall that he was the voice of Underdog. The role that made him famous, however, was that of endearing, yet unassertive Robinson Peepers, from the long-forgotten tv show Mr. Peepers.

Mr. Peepers was broadcast live, never to be seen again. The poor kinescope films have never transitioned into reruns, and many of those grainy 16mm films (shot on film from a special television screen at the time of broadcast) are lost. From 1952 -1955, Mr. Peepers was a critical favorite. A television show known as much for its soft comedic approach and as its madcap comedy. It's regular cast included Marion Lorne (Aunt Clara from Bewitched) and Tony Randall (The Odd Couple)and Patricia Benoit as Nancy Remington.

Mr. Peepers and Nancy were in a developing relationship that culminated in marriage on the May 22, 1954 broadcast. While Mr. Peepers was never a ratings bonanza for NBC, the spring of 1954 brought renewed interest and nationwide excitement when Mr. Peepers finally proposed to his long-time love interest Nancy. Newspapers and magazines hyped the event, and the nation stood still for Mr. Peepers, for this one night at least, and gathered around their sets to watch the kindred spirits wed. TV Guide gave the bride and groom the cover that week. While I Love Lucy first created the continuing arc story concept and event television, Mr. Peepers certainly signified that continuing storylines could culminate in high ratings and national interest. The success of the wedding episode of Mr. Peepers became a pop culture phenomenon and kept the mildly rated show on for another full season, and furthered the burgeoning idea of "water cooler" television.