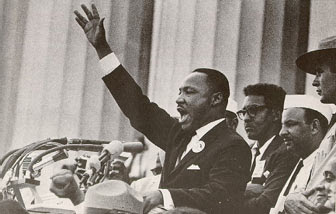 Just months earlier in Birmingham, Alabama, organized groups of black children sang "We Shall Overcome". The police began arresting children, and in total 959 children were put in jail! The following day, now depleted of holding cells, the police and fireman hosed children with a jetstream so powerful to break bones! Martin Luther King, Jr.'s civil rights march in Washington was a culmination of these unsettling events as witnessed by most American's on the evening news.

Televised on CBS, NBC, and ABC live, anyone watching television that day saw it. John F. Kennedy was watching and greatly moved. King's powerful, eloquent delivery stirred a nation toward change. In a rarity for TV, the entire speech was repeated on nightly news broadcast that August 28, 1963. His biblical and historical based speech struck a chord with most Americans. The performance won him the honor of Time Magazine's Person of the Year in late 1963, and a Nobel Peace prize in 1964. Later in 1964, President Johnson signed the Civil Rights Act.

Here is the end of King's speech, often referred to as one of the greatest American speeches ever produced, as he proclaims freedom across the nation:

"Let freedom ring from the snowcapped Rockies of Colorado!"

"Let freedom ring from the curvaceous peaks of California!"

"But not only that; let freedom ring from Stone Mountain of Georgia!"

Watch the full speech below as it unfolded on television.