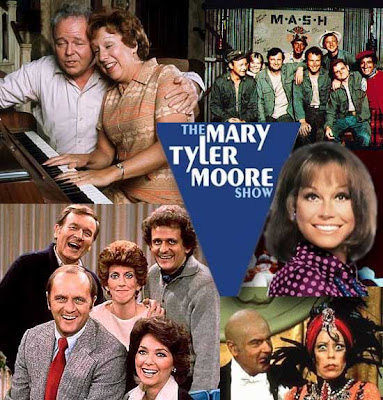 These days, networks treat Saturday nights as a deep, dark void, reserved as a dumping ground for unwanted television shows. There was a time, however, when Saturday night television was worth staying home to watch. The Honeymooners, Gunsmoke, Alfred Hitchcock, and Jackie Gleason were Saturday staples in the early days. Before the networks declared Saturday nights dead in the 1990s, big hits like the Golden Girls, The Love Boat, and Fantasy Island dominated. And for one season in the early 1970s, CBS lined up five classic television shows one after another, each show at their creative peak.

September 15, 1974, CBS' Saturday night fall season premiered with TV's #1 show, All In the Family. The follow-up show, M*A*S*H began its second and most critically acclaimed season. The centerpiece of the evening was the fourth season of the Mary Tyler Moore, the final season with Rhoda before her spin-off series. CBS wrapped up the Saturday line-up with The Bob Newhart Show and The Carol Burnett Show.

At the end of the 1973-74 season, those programs on CBS Saturday night received a total of 32 Emmy nominations and 14 wins. It was the most notable achievement in weekly programming and excellence in television history. The following season, CBS moved M*A*S*H, then All In the Family, followed by a drop in the ratings for each show. After nearly 2 decades at #1 in the ratings, CBS fell to ABC just 2 seasons later.


Posted by Iconservation at 8:58 AM