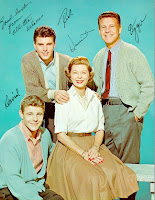 Ricky Nelson had pleaded for months with his father Ozzie to let him sing on their television show. Ozzie Nelson, the famous bandleader leader in the swing era, was thoroughly knowledgeable of the music industry. Ultimately, he decided it was smart business to market the character Ricky Nelson as a rock and roll singer. With his father's aid, Ricky selected some of the best side men in the business, including guitarist James Burton. In the studio and with Ozzie at the helm, Rick cut a Fat's Domino number, I'm Walkin', and the episode was timed with the official release of the record.

According to the official Rick Nelson website, I'm Walkin' sold over a million copies the first week after the show aired. Rick Nelson's music "videos" on the susequent episodes regularly pushed him to the top of the Billboard Hot 100, and for a number of years, Nelson was outselling Elvis Presley. In total, from 1957 - 1966, Rick placed 18 hit singles in the Top Ten. The Adventures of Ozzie & Harriet scored big as well, adding ten million teenage viewers to the show.

It is no coincidence that just 5 months later American Bandstand became a national sensation when it premiered on ABC, the same network that aired Ozzie & Harriet. Rick Nelson's massive success on the show excited the network about the current teen music industry. ABC was ready to rock and roll, indeed, after the April 10 episode of The Adventures of Ozzie & Harriet.

Posted by Iconservation at 8:58 AM