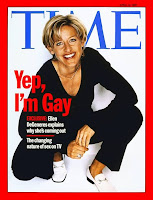 When Ellen Degeneres officially announced her sexual orientation on the cover of Time Magazine, "Yep, I'm Gay," it seemed like old news. Rumours had been circulating for months that both Degeneres and her TV character, Ellen Morgan, would come out of the closet. The show had never been a big hit, but the crossover of Ellen's real life into the fictional series catapulted the show to the top of the ratings and public attention. Religious groups scorned Disney-owned ABC, threatening to boycott anything related to either party. Jerry Falwell called her Ellen Degenerate, to which she aptly responded "I haven't been called that since 4th grade." The intensity of the debate essentially landed into the hands of advertisers, as groups on both sides of the issue awaited to see which corporations would sponsor the show. In the end, only the Chrysler Corporation pulled out.

The episode, however, was brilliant. Witty, poignant, and sharp, Ellen pulled together a classic show and an audience of 42 million. Many critics and viewers had long suspected there was great potential of the show, but seemingly never able to tap into a distinctive voice. "The Puppy Show," so titled to mislead the media about the episode's content, featured great performances and writing, ultimately winning both the prestigious Peabody Award and an Emmy, and gave Ellen much needed creative direction and energy.

Even with huge support from icons like Oprah Winfrey, ABC was a nervous wreck about the new Ellen. Beginning with the April 30, 1997 show, every episode that aired until the end of its run was given an opening viewer warning - as if it was an episode of NYPD Blue. After another season of time slot changes and internal fueding over the show's direction, viewer's gradually tuned out and ABC canned the show in 1998.

The show's impact was substantial, however, and the next season Will and Grace and Queer as Folk premiered, and other television shows began including postive portrayals of gay characters.


Posted by Iconservation at 9:38 PM