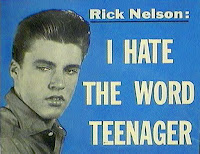 Rick Nelson's star should burn brighter. He was the featured player on The Adventures of Ozzie and Harriet, the quintessential family sitcom that ran for 14 seasons on television. Young 11 year old Ricky and the rest of the Nelson family debuted on television after a long run on radio. The young tyke grew up in front of America audiences and was 25 years old when the show finally left the air. His TV character's famous line, "I don't mess around, boy" became a national catch phrase in the early 1950s. His TV character quickly became the most popular on the show, and the majority of story lines were developed around him. 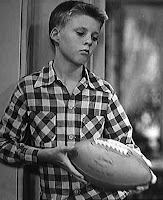 Young Ricky Nelson had a secret, however, he loved music! When Elvis Presley broke nationally in 1956, Ricky picked up the guitar and began to sing. Ozzie and Harriet scripts always incorporated the family's real life into the show, so it seemed natural for Ricky to also sing on TV. He was the ultimate All-American teenager, and it was a risk showcasing the teenager as a rock star. Rock and Roll was considered music of "degenerates" in the 1950s, and generally not acceptable on family shows. The Adventures of Ozzie and Harriet's popularity soared even higher, however, as audiences embraced his rock and roll act. And Ricky, soon to be Rick Nelson, became a superstar. 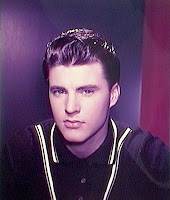 Rick Nelson became the first television character / performer to cross over into a successful, long term career in music. He used his television show to promote his latest releases, and by the end of the show in 1966, Nelson racked up a whopping 34 Top 40 hits on the Billboard Hot 100 chart. He also was an essential player in the early development of the music video, and is certainly one of the first pioneers of implementing visual and graphic elements on film to correspond with new music releases. More importantly, he was good. His introspective, sultry vocal style gave Elvis a run for his money, and ultimately landed him in the Rock and Roll Hall of Fame and the Rockabilly Hall of Fame! 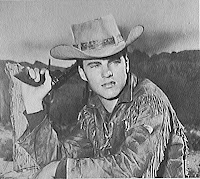 So why isn't Rick Nelson as fondly remembered and revered as Elvis, Lucy, or even "the Beaver?" He was a strikingly handsome rock star seen on weekly television for 14 years, crossed over into movies, and appeared on the cover of hundreds of major magazines. He had a successful recording career well into the 1970's. He even died at a very young age - which usually pushes icons to the forefront. For whatever reason Rick Nelson is not as well remembered as other major stars, his impact on television and rock music is exceptional. 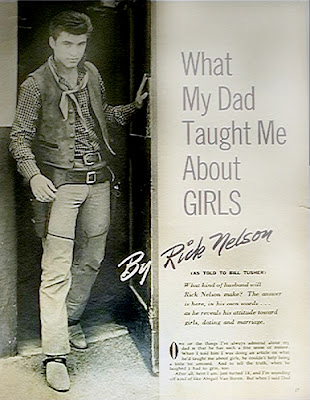 Rick Nelson died in a plane crash in 1985, at the age of 45. His four children have each had impressive careers on their own. The twins Gunnar and Mathew, known as Nelson, had successful recording careers in America in the early 1990s and are still virtually as popular internationally. Tracy is an accomplished actress and a staple on television, including two classic Seinfeld episodes, The Father Dowling Mysteries, and the classic, cult TV show, Square Pegs. She has made dozens of popular television movies. Sam Nelson inherited his father's brooding sex appeal, and is the front man for the underground rock group h is orange. Obviously, the Nelson genetic code runs deep.

Here are a few video clips from The Adventure of Ozzie and Harriet:

Rock and Roll Hall of Fame

Adventures of Ozzie and Harriet


Posted by Iconservation at 7:21 AM