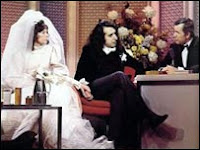 Tiny Tim was one of the most unlikely pop culture heroes ever. Sporting stringy hair and elongated nose, his eccentric personality matched his bizarre looks. His popularity soared to new heights with appearances on Rowan and Martin's Laugh In, and his debut album release in 1968 scored him a Top Twenty pop hit, Tip Toe Through The Tulips. It was his appearance on Johnny Carson's Tonight Show in late 1969, however, that pushed Tiny Tim to his greatest heights - as well as Johnny Carson's.

A publicity stunt for sure, Tiny Tim was set to wed Miss Vicky on the late night talk show. Calling her "Miss Vicki, my darling, fantastic angel," odd-ball Tiny Tim's wedding to the attractive, 17-year old Victoria May Budinger caught the public's curiousity, and the Tonight Show's ratings crested at a whopping 85% of the viewing audience and an estimated 40 million viewers. Tiny Tim and Miss Vicky wrote their own wedding vows for the show.