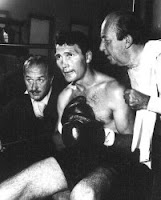 Requiem for a Heavyweight was the high water mark for television's golden age, and the second episode for the classic live anthology show, Playhouse 90. Rod Serling's teleplay recieved endless accolades from the entertainment industry, and arguably, no other television production in history has garnered as much high praise.

The telecast featured Jack Palance as a washed up boxer suffering from "punch drunk" syndrome. The New York Times heralded the telecast as "an artistic triumph that featured a performance of indescribable poignancy" and triumphed it a "play of overwhelming force and tenderness" and "a notable evening of theater." Serling won the first Peabody Award for a television script, and the entire production walked away with 4 Emmy Awards in 1956, plus a best series award for Playhouse 90.

The excellence of Requiem for a Heavyweight placed Rod Serling at the pinnacle of success for television production. Director Ralph Nelson and Jack Palance won Emmy Awards, as well. Playhouse 90 won the "best series" Emmy each of the four seasons it was on the air, and is considered by most the greatest dramatic television series of all time.

Rod Serling's career accomplishments include 6 Emmy Award winning teleplays such as Patterns, The Comedian, and two Twilight Zone episodes. Obviously, Serling is most famous for his classic science fiction series, and besides the five-year run for the Twilight Zone, also created the cult series, Night Gallery. Serling's motion picture screen plays includes The Planet of the Apes in 1968. The Twilight Zone made him a television icon, however, and that classic show is one of the few shows from the golden age of television still regularly broadcast on television.

Rod Serling's Requiem for a Heavyweight (below)


Posted by Iconservation at 6:50 PM