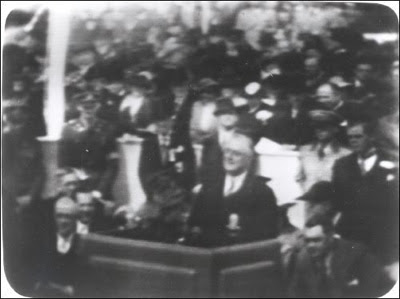 1939 World's Fair was the official end of the Great Depression. The focus was only forward, and the fair featured a world envisioned 50 years hence in 1989. Exhibits featured primitive computers, microwaves, copiers, and high speed jets, and of course, television. The 45,000,000 people who attended were opened to a world of unimaginable convenience and luxury. Opening Day, April 30, 1939, the fair's events and exhibits were showcased by live broadcast to a plethora of television sets in the RCA Pavilion. As an added prize, fair attendees could stand on stage in front of a yacht and be broadcast to nearby televisions. Hard to understand today, but this seemed like magic to the audiences of 1939, and the yacht was used to prove the broadcast was real.

World War II, less than 6 months away, would vanquish that futuristic vision of hope and luxury, at least temporarily. By 1946, however, the vision offered by the 1939's World Fair resurfaced, and all of America was ready for the future. The best place to start was the $375 RCA Victor television set.