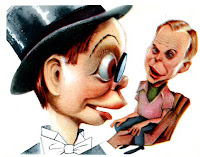 This forgotten show, Hour Glass, is credited with the being the program that convinced radio networks to pay attention to television programming. Hour Glass premiered May 9, 1946 and ran only a few seasons, like most early shows. The difference was in the quality. Hour Glass presented an hour of variety programming that included comedy sketches and music, and was television's first "big budget" presentation.

A few months after the premiere, on November 14, 1946, radio officially crossed over to TV. The audio-only medium featured a host of stars already regularly welcomed into homes across America. On this telecast, Ventriliquist Edgar Bergen and Charlie McCarthy made their cross-over debut into the new medium. Posters publicizing the event were created for trade magazines featuring cartoon characters of the ventriloquist act. The possibility of viewing entertainers before only heard stirred excitement and new energy into television broadcasting. Bergen and McCarthy jump started their new career in television, and a stream of radio favorites began to develop their radio shows for the small screen. Within five years, radio stars Jack Benny, Bob Hope, Lucille Ball, Abbott and Costello, and Burns & Allen were ensconced in television.

Posted by Iconservation at 11:09 PM