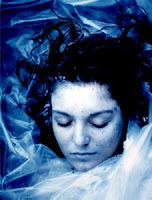 David Lynch's films, Eraserhead, Elephant Man, and Blue Velvet, had sparked a cult following due to his edgy, intimate, and dark technique. When it was announced that Lynch had landed on the 1989 fall TV schedule with his new mini-series, there was immediate buzz, publicity and interest. Time Magazine called him the "czar of bizarre." Entertainment Weekly boasted the "triumph of Twin Peaks" even before the program aired. ABC decided, however, to hold the show until spring, offering 6 months of build-up and an option to continue Twin Peaks as a regular series in the fall of 1990.

Sunday, April 8, 1990, viewers were lured to television to see if there was any merit to all the hype. From the episode's beginning, it was obvious that a very different kind of television program was unfolding. As the body of teenage Laura Palmer is unwrapped from heavy plastic, the intense sound of crinkling plastic unveiling her pale blue face established this as no ordinary television show.

Slowly, intensely and starkly, the two-hour launch unfolded in gut-wrenching drama as the viewer witnesses the reaction, character by character, of the discovery of the death of the popular teen. The production's subdued blue tones and intense close-up photography wowed the audience, particularly disturbing scenes like the magnified lens capturing a tiny, hand-held pick removing evidence from underneath the dead body's fingernails. These visuals often played under the sumptous, eerie soundtrack. The end of the episode left everyone eagar for the next installment, scheduled 4 days away, as the installment's end provided possible connections of Laura to cocaine use and prostitution.

The overnight ratings placed it at the top for the night, and 5th place for the week. According to Brandon Tartikoff, however, he was stunned to learn that Lynch could care less how huge the ratings were, and concluded that avant-garde Lynch was "even more dangerous than we thought." By Thursday, the American audience had been whipped into a gossipy frenzy over the quirky, ominous premiere and stay tuned. Being scheduled opposite to TV's top show, Cheers, suddenly seemed irrelevant. America had to know more about Laura Palmer.

While the remaining 7 episodes maintained the quality and audience, Lynch pushed the viewers to the brink with promises of revealing the murderer by the end of the season. It did not happen, however, and much of the audience eroded after the May finale. It was the remarkable premiere, however, that greatly influenced the direction of television. Future shows such as the X-files, Northern Exposure, and the CSI chain imitated Twin Peaks off-beat, quirky style, and introduced an art house style of filmmaking to television, a Lynchian vision that is still proliferated today on HBO and other up cable networks.


Posted by Iconservation at 2:25 PM