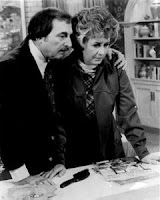 Maude, the radical spin-off from All In the Family, was even more controversial than Archie Bunker. Brash, loud, and feminist, Maude Finley was a character like no other before on television. Just ten episodes into the series, Norman Lear's comedy created one of the biggets television controversies of the decade. 47 year old Maude discovered she was pregnant. This was before the Supreme Court's landmark Roe vs. Wade decision, but Maude decided to have an abortion.

Titled Maude's Dilemma, the two-part episode unfurls plot devices dealing with the abortion, and also birth control as Walter considers a vasectomy. Over 25,000 letters were written in protest, yet 65 million viewers tuned in. The boycotted show produced a little expected result: CBS, and the entire television industry, discovered that extremely controversial television brought blockbuster ratings, and Maude hovered in the top ten for the next 4 years.

Maude's Dilemma started a revolution as various advocacy groups turned their attention to television. Religious groups, African-Americans, Gays & Lesbians, and Hispanics began to threaten networks and advertisers with boycotts. A 1989 New York Times article, Taming of the Tube, "details a more chilling story of human vulnerability to power and corruption: how again and again the networks craftily subverted idealistic protesters by offering them official status as consultants, thus transforming them, if not into pussycats, at least into well-behaved beasts of burden, unwittingly laboring to help the networks achieve their primary goal: higher ratings for the very programs under protest." By the home video explosion in the 1980's, the networks were using hot-button topics to actually lure viewers back to television .

In an interview with USA Today, Maude's star Bea Arthur describes her experience portraying "the liberal, 4-time married adversary of Archie Bunker, "She was not your average, beautiful heroine, but I felt like Cinderella," says Arthur, now 83. "It was one of the first times on television that a woman was seen as the head of the family instead of the usual fumbling male."