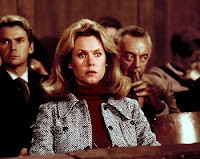 At last check, this made for TV movie is still one of the Top Ten All Time ratings winners in the entire history of television. Starring the actress responsible for the lovable and admirable witch Samantha Stephens on Bewitched, Elizabeth Montgomery raised the bar on television production with A Case of Rape. The story-line featured graphic rape scenes and violence, and much of the nation pretended to take offense, but the ratings told a different story. Children in America were warned to stay away from television that night completely, including the author of this blog. As fortune would have it, my parents had planned to be at friends house that night. I sat transfixed to a horrific truth unfold before my eyes, then watched it happen a second time as Ellen Harrod (Ms Montgomery's character) was raped again by the same assailant. Bewteen these events, the storyline critically examined the way the hospital, courts, and other people treated rape victims . . . errr . . . that should be mistreated.

This explosive movie was the talk of the television season along with another significant program, The Autobiography of Miss Jane Pitman with Cicely Tyson. This was only one in a long string of television movies for Ms. Montgomery that examined the victimization of women in society, and it has long been suggested that her controversial, feminist (and pro gay-rights) views kept her from winning at least one Emmy award out of nine nominations.

A Case of Rape brought such major awareness to the plight of rape victims that many important laws protecting rape victims were enacted nationwide. Ms. Montgomery was so dedicated to the project that she threatened to leave the project if the network continued to insist the second rape be removed from the final script. The NBC network backed down to her demands, which defines the tremendous power Elizabeth Montgomery possessed in television during her peak.

Posted by Iconservation at 1:32 PM