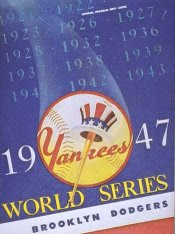 The 1947 World Series is still revered by sports afficianados. Countless sports shows and documentaries have featured and referred to this classic television event, the first World Series broadcast.

The series pitted the New York Yankees against bitter rival the Brooklyn Dodgers. Yankees Joe DiMaggio and the unbeatable Allie Reynolds had been charging up the fans all season. The Dodgers had just added Jackie Robinson to their roster, breaking the racial barrier and making this a landmark series indeed. Baseball was at an all time peak, and this series had everything, including rookie Yogi Berra.

And for those unable to attend, it was truly miraculous. It was being broadcast to bars and homes, though in most cases a neighboor's home. The New York area broadcast, including Philedelphia, Washington, and Schenectady was an NBC gamble, but the network certainly suspected the two New York baseball rivals would be the perfect test for the new medium. NBC's good fortune was momentus and it is still considered one of the greatest World Series of all times.

By Game 4, with baseball fever running at full force, it appeared the Brooklyn Dodgers were taking full revenge against the Yankees. Bill Bevens was pitching a series no-hitter, however that was before Cookie Lavagetto made it the "Cookie" game. People watching grainy gray telecasts on 7 inch television screens, and at their neighbor's home were dreaming and planning to own a televsion set for their living room.


Television coverage of the series was a smash, with an estimated total viewing audience of 3.9 million. It provided the medium a new sense of urgency and potential. Owning a television was the new American Dream.