NBC chief Pat Weaver called them Spectaculars! These were lavish, big budget specials from the 1950s. Most were broadcast live and in color, and associated with select producers. Broadway star Mary Martin had just won her 4th Tony award, and Weaver spared no expense mounting Peter Pan. The Washington Post predicted it "to be the TV accomplishment of the year," and it was.

Children and families loved the production, whether they watched in color or black and white. Peter Pan topped the ratings for the week. Time Magazine triumphed, "As the first play ever televised in its entirety fresh from its Broadway run, NBC's Peter Pan was the biggest news of the week," and called Mary Martin's performance "warm, saucy and soaring." The New York Times crowned the broadcast as "television's happiest hour". 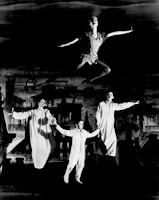 Mary Martin won an Emmy in 1955 for Peter Pan, making her the only star to win a Tony and Emmy in the same year (and for the same role.) NBC was so pleased with the remarkable success of the spectacular, Producer's Showcase mounted the same production again in January 1956. In 1960, after years of repeated performances, all lost to live broadcast, Mary Martin committed the production to tape for posterity.

The success of Peter Pan moved programming in a new direction. These special, high-budget Spectaculars raised the standards and expectations of home viewers, and offered a temporary respite from regular programming.