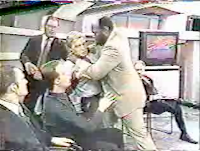 Geraldo Rivera had taken note when his 1987 episode "Men in Lace Panties and the Women Who Love Them," brought higher ratings. Disguising journalism and education with sensation, Rivera's latest incarnation, Geraldo, intended to wring out the last drop of journalistic integrity for mass appeal and financial gain.

In October, 1988, Geraldo put racism in the hot seat with the volatile mix of a Jewish activist, a black activist, and a trio of white supremist. By the final segment, the audience and guests, with ample assistance from the show's producer, were wound tight with racial tension. After further taunting the White Aryan Resistance Youth about their lack of education, one of the supremist referred to activist Roy Innis as "Uncle Tom".

The bomb blew. Innis, within seconds had a tight grip around a supremist's neck. The immediate explosion brought two dozen men to the stage. In a blur of arms, fists, and chairs, Geraldo went down! As he reappeared on stage, his nose was broken and the studio was out of control.

The press was covering the story even before the episode aired. The haughty mainstream press used the story and actual footage to bash Geraldo and his show. Somehow the mainstream news missed the irony of their own glee and prosperity of repeating the riot clips. With over-exposure, a serious topic had become a national punch line. Only a few days after the show's taping, pranksters had climbed 30 feet high and painted nose bandages on Geraldo's super-sized Hollywoood Boulevard billboard. In November, Newsweek featured a bandaged Geraldo head shot, exclaiming Trash TV: From the Lurid to the Loud, Anything Goes. Within hours of the episode's taping, it was the hottest news story around. When the show finally aired, Geraldo broke ratings records.