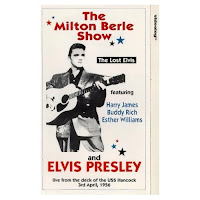 After an amazing run in television, Milton Berle had persevered in several formats over 8 seasons. In 1956, simply no other show or star had enjoyed a longer run. The broadcast of May 6, 1956 was significant for several reasons. For one, it was the final broadcast of Berle's show, which began way back in 1948 and was credited for generating mass excitement; the purchasing of television sets ensued.

But on May 6, 1956, an even greater event occurred that shook televsion to its core. Elvis Presley was making his second appearance. The first one generated enough buzz to increase the ratings. The first was telecast live from a naval ship to an audience of sailors. The second appearance from Berle's studio, however, created a a firestorm of controversy that even Berle didn't see coming. Broadcast live and in color, Elvis Presely took the stage to perform Hound Dog. Elvis gyrated in sure-fire suggestion of sexual ecstasy, such a shocking display had never been witnessed on television; it was not acceptable by any standard!

Even viewing the grainy black and white kinescope in the 21st Century can elicite stunned viewer silence at the performance. The nation's parents watched in horror as their teenage daughters screamed and moaned with equal sexual ecstasy on living room floors across the United States.

The event was so powerful and significant, RCA rushed Elvis into the studios to record Hound Dog for rush-release, and the single stormed up the record charts. Elvis was immediately labeled a degenerate, a hood, and a number of other prejudicial remarks as well. The following day, The New York Times' Jack Gould stated Elvis' music sounded like "a beginner's aria in a bathtub." Gould referred to Elvis as a "virtuoso of the hootchy-kootcyy" and declared "he was an assignment for a sociologist."

Stated directly, this was the reason white America did not want colored music and artist on television and radio. Now, suddenly, in the mid-1950s, a white man was making a mockery of their "civilized white" nation and threatening to take their children down a road of perversion with him. While this episode catapulted Elvis to superstardom, poor Milton Berle wasn't as lucky. The network canceled his show immediately following the episode, either out of belief that the shows success was due to Elvis, and Berle had run out of steam, or perhaps the network was none to thrilled that Uncle Miltie's was so obviously enthralled by young Presley's performance.

The end result was everyone involved was treated with caution. The following fall, Ed Sullivan would only allow Elvis to be filmed from the waste up out of fear of another firestorm like the one from the final Berle show.