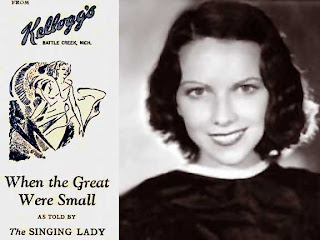 Irene Wicker was a pioneer of children's programming on radio. Her show, "Kellog's Singing Lady" featured more story-telling than singing. Children also adored her singing voice, and her radio show was essential childhood listening of the 1930's. Her songbooks were marketed on boxes of Kellog's cereals, often featuring her own adaptations of classics, including Charles Dickens and Oscar Wilde.

She transitioned to television with ease in the fall of 1948, becoming one of the most popular stars of children's television. Adding an imaginative visual layer to her radio program was a perfect fit, and ABC's The Singing Lady telecasts were poised to run another decade.

The show's run was halted abrubtly in 1950, when she was listed in the red scare propaganda magazine, Red Channels. The program's sponsors immediately dropped the show, and ABC cancelled it. Ultimately, it was shown that Ms. Wicker's name WAS NOT listed in Red Channel among the long directory of suspected communist and loyalists in Hollywood. Many careers were destroyed by the red scare and Red Channels. Ms. Wicker cleared her name, and five years later. the network's attempt to revive the show failed. The damage had been done. Once implicated as a communist in the 1950's, it was fatal.

While Irene was never was able to completely remove the public stigma of the communist label, she was recognized for her outstanding contributions to radio and television with a 1960 Peabody Lifetime Achievement Award.


Posted by Iconservation at 6:09 PM