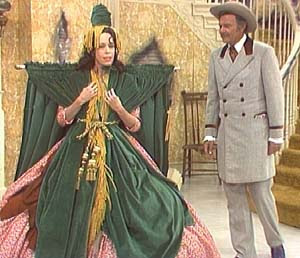 Late in the long run of the Carol Burnett Show, after a decade on television, this classic variety show was funnier than ever. On November, 13, 1976, episode #238 opened with typical Burnett banter with the audience, and announcing the show's guest, Dinah Shore.

It was the last half hour of the broadcast that can still produce a roomful of laughter just speaking about it! The sketch, Went with the Wind, was timed with the television premiere broadcast of the movie classic, Gone With the Wind. Carol Burnett parodied Scarlett, Dinah Shore played Miss Mellie, Harvey Korman mocked Rhett, and Vickie Lawrence, nearly stealing the show, spoofed Prissy.

The sketch created a greatly condensed version of the movie, and produced one of the most iconic moments in television history. Scarlett, in attempt to look fresh and successful, rips the green velvet drapes down from the window to make a new gown. From the top of the grand stairs, Carol Burnett's Scarlett decends in her new dress, with the curtain rods still attached. As one of the longest laughs in television history finally subsided, Rhett complements her dress and Burnett replies, "Thank you, I saw it in the window and just had to have it."

Trivia: It should be noted that an almost equally funny paradoy of Gone With the Wind had appeared on TV's Here's Lucy four years before, with guest star Flip Wilson, and over the years some viewers have confused and combined the two sketches. Almost no one, however, confuses the iconic image of Burnett's Scarlett O'Hara, as it is permanently burned into the fabric of American culture.