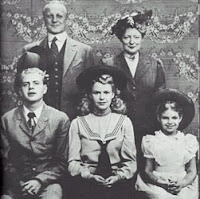 I remember Mama, but I love to visit the Museum of Television & Radio. This long-forgotten show ran seven seasons and was one of television's early blockbuster hits. Mama featured a Norwegian family in early 20th Century San Francisco as remembered by daughter Katrin. Each episode opened with a classic monologue as Katrin flipped the pages of the family photo album, "I remember the big white house on Elm Street and my little sister, Dagmar and my big brother Nels, and of course, Papa But most of all, I REMEMBER MAMA"

The hallmark of this series was warmhearted tales of family survival. Mama featured complex characterizations set against a backdrop of social tension. The series usually ended each show with the family gathered around the table enjoying a cup of Maxwell House Coffee, the show's sponsor. Often labeled a comedy/drama, the show was a forerunner to shows like the Waltons, and Little House on the Prairie.

On December 23, 1949, Mama changed the direction of television in a different way. Wrapped around a Christmas theme, the episode's centerpiece was the Christmas tale of how the barnyard animals could speak a few hours on Christmas Eve in Bethlehem at the birth of Jesus. The episode was a phenomenal ratings success; so much so, that the cast restaged the live Christmas themed episode every year during December. The impact was significant, and holiday themed episodes and specials are still a staple in television programming. The networks, it seems, still remember Mama.

Posted by Iconservation at 3:54 AM