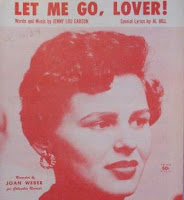 Studio One was one of television's most ambitious and acclaimed anthology series. Like all these hour long presentations of classic plays, musicals, and variety showcases, the ratings were never consistently high, but rose up and down depending on the weeks presentation. Each week was a risk.

During preparation for the upcoming November 15, 1954 hour, producer Mitch Miller realized one of the featured songs by actress Joan Weber was sensational. Titled Let Me Go, Lover!, it was the highlight of the production. Miller, thinking ahead to the built-in audience of 30 million viewers, rushed the song to record stores, where it sat like a lead balloon. Miller had predicted correctly, however, and immeidately after the November telecast, record stores were rushed by 100,000 Studio One fans wanting Let Me Go, Lover! The record bound up the Billboard charts immediately on its way to the number one song in the nation.

Cross-promotion of music created for television was born, and record companies began a long-term marketing relationship with telelvision, essentially paving the way for MTV.