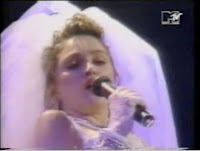 By 1985, MTV had revolutionized the music industry. Video had killed the radio star, and, naturally, MTV decided it was time to hand out some awards. The first MTV Video Music Awards was hosted by Bette Midler and Dan Ackroyd, setting the tone that this was not your parents' Grammy show, but a youthful celebration of everything edgy, decadent, and dangerous. It was a perfect fit for their "virgin" broadcast that newcomer Madonna debut her single from her second album.

Rising from the stage on a giant wedding cake, a fully-veiled Madonna launched into "Like a Virgin" in full wedding attire and a "Boy Toy" belt buckle. As she stripped her wedding veil, Madonna introduced herself to the world as true performance artist. By the song's end, Madonna was literally writhing and grinding on the stage floor. Audiences at home and in the auditorium went wild, and the performance catapulted Madonna into the stratosphere. Not since Elvis had a television performance caught America so off-guard. It would hardly be the last time that Madonna would push the envelope and stir up controversy.


Posted by Iconservation at 9:33 AM