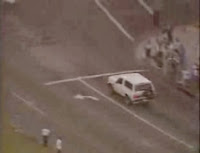 All the evidence pointed to a premeditated crime of passion. A six inch knife purchased days before the murder measured the same depth of the stab wounds. The suspect had been spotted in the neighboorhood, running a redlight in his Ford Bronco, around the time of the murders. A waiting limo driver witnessed a tall, dark figure race through the yard and immediately into the house, where the suspect finally answered the limo driver's repeated calls. The suspect says, out of breath, "he overslept." The suspect had planned a last minute trip to Chicago, and was scheduled to leave for the airport immediately!

Once the DNA was analyzed, the suspect's blood was found intermingled with the two murder victims, including on a glove left behind. Also left behind were a set of six bloody footprints, all from the same person, seemingly a man with expensive taste in shoes. Perhaps the most incriminating aspect were the corpses. Violently and repeatedly stabbed, each the hallmark of a crime of passion. O.J. Simpson's violent past and abuse toward his ex-wife fit the pattern. He was the prime suspect.

Of course, this is the infamous murders of Nicole Simpson and Ron Goldman. The suspect, football legend turned actor O.J. Simpson, on June 16, 1994 attended Nicole's funeral, falling on the casket and begging forgiveness. The next day, with so much evidence studied, analyzed, and tested, it all pointed to O.J. Simpson.

Simpson's attorney, Robert Kardashian, was notified the morning of June 17 to report with his client to the LAPD headquarters. O.J. never arrived, and 3 police cars were dispatched to Kardashan's home, where O.J. Simpson was staying. Kardashian, however, tells the police that O.J. and friend Al Cowling drove away in Cowling's white Ford Bronco and never returned.

At 2:00 p.m., LAPD Spokesperson and Commander David Gascon announce at a Park Center press conference that O.J. Simpson was a fugitve on the run. A warrant had been issued for his arrest as the suspected murderer of Ron Goldman and Nicole Simpson.

By 5 pm, with an all points bulletin issued for the capture and arrest of Simpson, Robert Kardashan held an impromptu press conference to publicly plea for O.J. to turn himself into the Los Angeles Police Department. Kardashian also read an ambigious, desperate note from O.J., seemingly suicidal, proclaiming his innocence within a lengthy, meandering letter.

It was not long before the LAPD traced Simpson and Cowling's cellphone location within Orange County, and at 6:45 pm, Cowling's white Ford Bronco was spotted driving north on Interstate-5. Soon a trail of police cars and helicopters were hovering on the slowly traveling Bronco. Cowling reported by cell phone that Simpson was suicidal and holding a gun to his own head, threatening to kill himself. With this, feverish coverage by news media began. Every major network halted regular programming to cover this odd, unintentional event. Within minutes, millions of viewers tuned in to watch the birds-eye view of the white Bronco traveling a mere 40 miles per hour. Slowly and delibertly, it weaved between traffic. Soon, the interstate was lined with cars and people, many carrying signs reading "Go, OJ, GO!" Crowds on overpasses shouted, and cheered, as if the event was a parade for a ballgame.

The dawdling police chase was like some surreal action movie filmed in slow motion. The impromptu television event lasted for hours, as American's sat glued to watch the story unfold. After hours of slow motion drama, driver Cowling moved toward the Simpson address at Rockingham Avenue, and television viewers stayed tune to see the final outcome. Would O.J. Simpson kill himself? Would he surrender? Would he attempt another getaway?

As 8 pm Pacific time approached, the plodding journey ended as the now famous white Bronco arrived at Simpson's home. Also waiting were 27 LAPD swat team members, a dozens of other specialist, negotiators, and assault teams. Even so, O.J. Simpson refused to leave the Bronco, and sat huddled inside, still with the gun to his head. At 8:45 pm, once O.J. Simpson was prevailed to exit the Bronco and face his arrest, the viewers received their denouement. Found in the white Ford Bronco was Simpson's passport, a disguise kit, a loaded Smith and Wesson .357 Magnum and $8000.

The final tally was that 95 million U.S. viewers watched the event unfold that night. It was the end of the chase but just the beginning of the story called the "Murder of the Century." Over the next year, Simpson was the lead televsion news story. He even eclipsed Elvis Presley as the #1 most-googled name on the internet. O.J. Simpson was the most famous man on earth.