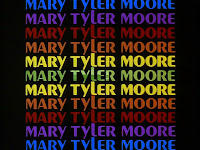 On the eve of the home video explosion, TV viewers gathered at the same time, on the same channel, entering a type of national collective consciousness, as millions of minds, eyes, and ears would be tuned to their favorite programs. Some programming, such as Mary Tyler Moore (and much like I Love Lucy, Dick Van Dyke, and All In the Family) promised better televsion than most shows, and on occassion, transcended into thirty minutes of excellence to be discusssed, not just the coming week over watercoolers, but for decades.

October 25, 1975 was one such rare occassion. Just a month into the new 6th season, Mary Tyler Moore took the unlikely comedic subject matter of death and left America doubled over from laughter. As our heroine Mary Richards listens, aghast, the WJM crew crack joke after joke about Chuckles the Clown's disturbing death. Dressed as a large peanut, he was crushed in a parade by a rogue elephant. Mary's dismay represents the moral view, and home viewers respected her struggle with the entire station's flip, disrespectful conduct. At the same time, the jokes about Chuckle's death were hysterical.

Of course, the payoff is Mary Richards, in the midst of the funeral service, as all involved have shamed themselves into respectful silence, gets the giggles. As the minister eulogizes, "If only we could all deal with it as simple and bravely and honestly as Mr. Fee-Fi-Fo. And what did Chuckles ask in return? Not much--in his own words--"A little song, a little dance, a little seltzer down your pants," our heroine can hold the laughter in no more.

Turning in a performance ranking as great as any Lucille Ball accomplishment, Moore's transcendance into gut-bursting laughter toward a final, embarrassed gut-wrenching wail is a comedic masterpiece. The entire viewing audience knew they had just witnessed a very special televison moment.