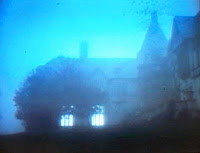 By the fall of 1969, ABC's gothic romance and horror show Dark Shadows seemed unstoppable. The series soundtrack and massive hit single, Quentin's Theme, had been released to great fanfare. The series was reaching a ratings high of 18,000 viewers a week, a remarkable audience for daytime television. College students across the nation gathered in dormitories and lobbies for their daily dose of Dark Shadows. Kids rushed home from school to catch the latest episode. Movie studios were in talks with Dan Curtis for a big screen adaptation. The series had crossed the treshold into popular culture as few televsion shows had.

The summer of 1969 saw the storyline again back in time, in the year 1897. The costumes and sets were lavish, and the Dark Shadows crew used the growing budget dynamically. Television had never before witnessed such an ambitious show. Producing a new episode each day, live-on-tape, the cast and crew literally had 30 minutes to perform the show and send the video signal via telephone lines to a larger ABC studio for recording on video tape. If that wasn't difficult enough, dozens of remarkable sets and props were used and changed daily. Throw in cutting edge special effects and experimentation with the video format, topped with a beautiful and talented cast of New York stage performers, and one would have to wonder if feat this could be pulled off today, in 2007.

The star players were Jonathan Frid (Baranbas Collins), David Selby (Quentin Collins) and Lara Parker (Angelique). These were creator Dan Curtis' "big guns" as he called them, as they were the only series cast members whom always played the same character. Frid's Barnabas was the show's superstar since 1967, and the audience had grown to love this nervous vampire with a helpful, caring heart - despite his true, dark nature.

On September 11, 1969, as viewers watched the 1897 story unfold, suddenly, out of nowhere, Barnabus was destroyed with a stake through his heart. The ABC studios recieved outraged mail and angry phone calls. It just couldn't be that Barnabas was dead. Over the next 4 weeks, the writers taunted and teased the audience. Was he dead, destroyed, gone forever? Dark Shadows had a history of killing major characters throughout its run, so no one really knew.

When Barnabas did return in October, Dark Shadows gathered record viewers. Dark Shadows continued for the next year and a half, and despite what some critics have said, produced its best, most polished work while exploring parallel time themes, time travel into the future (1995) toward the ultimate destruction of Collinwood.

Darks Shadows influence is unparalleled. Stephen King and Anne Rice have stated the show's direct influence on their work. The concept of endearing monsters involved in human classic tales of love, death, and the struggle with inner demons all started with Dan Curtis' Dark Shadows, and writers Sam Hall and Gordon Russell's complex characters.

September 11, 1969 was not the first time Dark Shadows created a national outcry or intensified viewer response, nor would it be the last. It was, however, its greatest moment; and daytime television, in general, became more ambitious and aware of its potential.


Posted by Iconservation at 7:11 PM